This year’s Artmaker bag, designed and produced entirely by Share, was also made possible by Turin’s storied fabric store,  Provasoli which not only offered us the finest fabrics but also its eclectic knowledge of the production of new generation materials using cutting-edge techniques, and its innate fashion sense. Designed and produced by Ingrit Kerpi and Francesca Ventura.

The Artmaker project will also be part of the educational initiative delivered by the Share Campus, which this year includes theory lessons and hands-on sessions in prestigious local schools: Accademia Albertina di Belle Arti c has collaborated with the Share Project since the start and Politecnico di Torino another partner in many of our projects, and our new collaboration with the  Istituto A. Monti in Chieri.

The curatorial committee comprising Bruce Sterling, the Artistic Director of Share Festival, and Chiara Garibaldi, D the General Manager of Share Project, selected the six participating artists: artists from different fields, with different source material, whose work is characterized by unique research and techniques, skills acquired over years of study and collaborations. We have brought them together with the intention of telling a new story, drawing on new ideas and inspiration, interfacing different generations, cultures and academic backgrounds.

Artists as creators of dreams; artists ready to get to grips with the Artmaker Bag, made for them and donated by Share Project, to produce a new work of art that will be presented at the Share Festival XIV, ‘GHOSTS’. 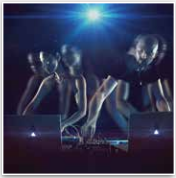 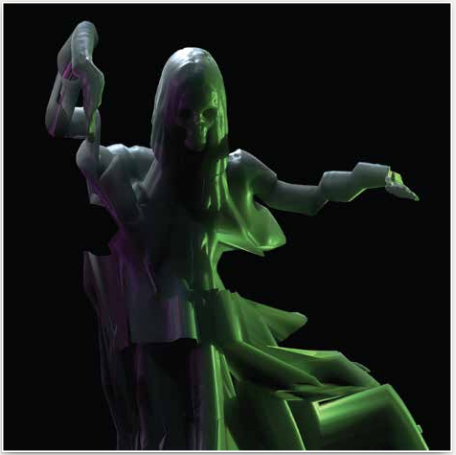 The work is a revisitation of the theme of memento mori, used in the late Middle Ages to invite to reflect on mortality and the transitory nature of matter and earthly things.
The artists scanned their bodies to create 3D models, later replacing the faces of the models obtained with skulls. The motion capture animation of these digital bodies gives life to a contemporary and impermanent danse macabre, suspended in space and time. 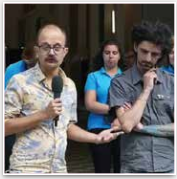 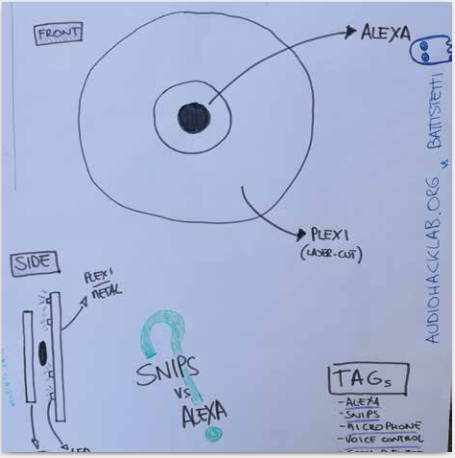 Audio HackLab is a collective with a passion for self-production, driven by the need to share knowledge, ideas and artistic practices. We use electronics and the new digital production technologies, while still preferring a hands-on approach to the material we work with. Since 2014 we have been doing research on and hacking sound machines and tools, and designing artistic installations and workshops.

In the collective imagination the idea of artificial intelligence calls Kubrick’s films to mind, and HAL 9000 with its single red and black eye. The vocal assistants now on the market, however, take the form of harmless looking cylinders or smooth pebbles in subtle shades. The dramatic, menacing colours of 2001: A Space Odyssey have disappeared, but something dark nonetheless remains. Nevermind Hal9000 explores the sinister side of home assistants that record everything we say, by reproducing what the assistant has heard in the last five minutes. The technologies concealed in digitial assistants are closed, and it is by no means clear how they actually use all of our data. We see our homes as safe spaces, but is that still the case if we have a digital assistant? The purpose of this experience is to provide us with devices that will protect us from other, less friendly technologies. 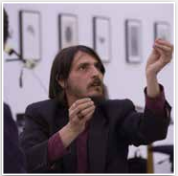 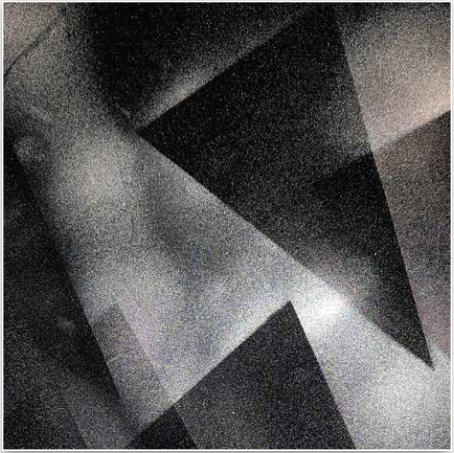 Born in 1976, Turin, where he lives and works. Graduated in Architecture at Politecnico of Turin, he studied at Fondazione Spinola Banna and took a degree in the course “Designing the exhibition” at Domus Academy of Milan. Winner of national and international awards, he exhibited in Turin at Fondazione Merz, Gallery of Modern and Contemporary Art and at Sandretto Re Rebaudengo Foundation. His education background focuses on experimental sound and music with a strong emphasis on performative and sculptural installation.

The hunter is the spectator.

The experience is a hunt for the invisible and the magic.

The experience is invisible what remains is the photo.

Ghosthbusting triggers and starts using the flash of the mobile phone camera. 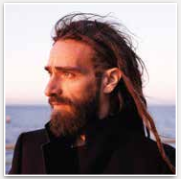 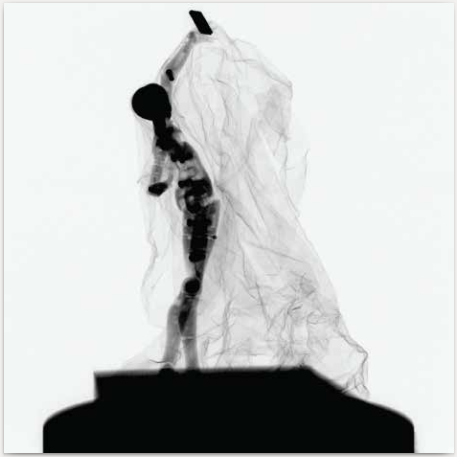 Diego Scroppo, born in Turin in 1981, graduated at the Accademia Albertina di Belle Arti in 2005. He has taken part in the curatorial programme run by Unidee Città dell’arte, Fondazione Pistoletto in Biella and in an artistic project in collaboration with the LeFresnoy Institute of Lille, and is currently at the Fondazione Spinola Banna for the arts. He has held two solo exhibitions at the Guido Costa Projects Gallery, other two on his “ghost space”, and has participated in various international collective shows.

Allegory of the selfie. In the social media age our profiles are what interface with the online world, what we want to show of ourselves through the screen’s filter. The screen is the mirror of our time and profiles show a partial glimpse of a pose of the subject/object reflected in it. Yet while the mirror reflects the image and offers the subject a more or less faithful copy of him or herself, the screen projects an image into the ether that will never be returned to the subject. The materialization of our image dissolves and dissipates in the ether, becoming the spectre of the image of a self that will never come back – faithful or otherwise, we cannot know. In the present day the cult of Narcissus has taken hold like never before, using technology to manipulate insubstantial digital matter to conjure up phantom simulacra of people. 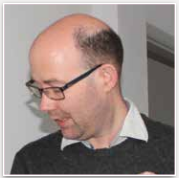 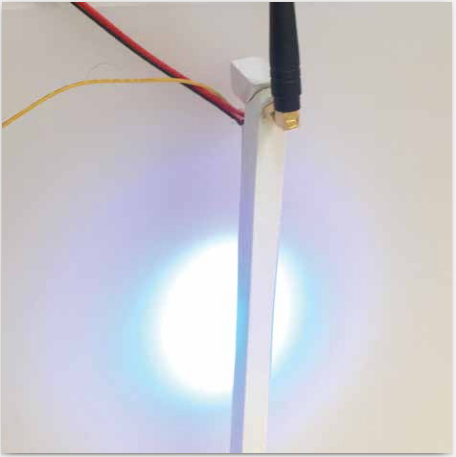 Born in 1981 in New Zealand. Lives and works in Vienna. Makes art, sound, software, and music. Former openFrameworks contributor, former videogame developer; ongoing consultant for artists working with electronics and code. Interested in all forms of cross-disciplinary communication, especially between the languages and concepts of the humanities, and the languages and concepts of the sciences. Currently studying Cultural Studies and Literature at the University of Vienna.

When we engage with digital media, we bring our physical, embodied selves into contact with technological interfaces. Through these we communicate: we share our thoughts, our beliefs, our desires, our fears; we make contact, we discover who we are by finding others like us, and others not like us. To do this, we must reconfigure and reinvent our embodied selves. We transform our corporeal experiences into ghostly electronic forms, and transmit these through whatever technological means we have available, inventing ad-hoc languages and crafting cultures as we go that let us be us in ways that we find meaningful. This process has always been a negotiation. Increasingly, however, it is a negotiation with concentrated power. As ownership of channels of communication crystallises in vast, opaque, empire-crushing platforms, it becomes unclear how the self can survive with its autonomy intact. 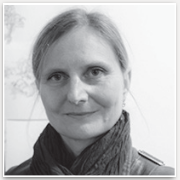 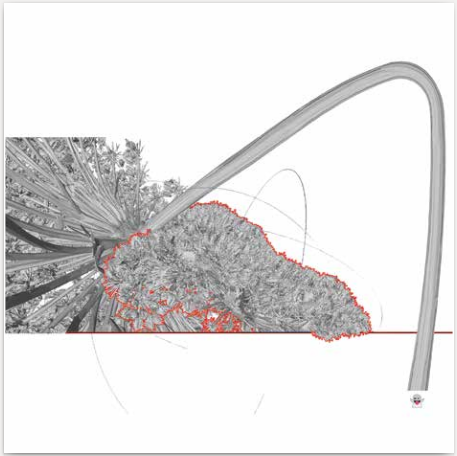 This sculpture takes shape in a process that is both operative and conceptual, hybridizing subjectivity and technological devices. It originates from some wild flowers whose shapes, scanned and 3D printed, are only partially reproduced, with different scales, giving rise to fragments that seem to emerge from the coordinates of the three dimensions, or perhaps from “other” dimensions. Other portions of the work do not derive from the original forms but materialize allowing the printer to work “freely” or otherwise called mistakenly ‘mistakenly’. In one of the pieces that make up the sculpture, the intersection of two elements creates a “third” area, visible thanks to the transparency of the photosensitive resin with which they are made. Flower in a flower, and a flower is a changing presence, whose perception varies according to the way in which the light – and the look – passes through it.